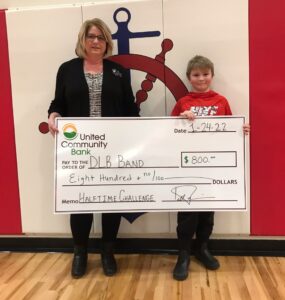 were developed with the goal to create a fun and unique opportunity to raise donations for non-athletic needs within the schools.

In total, four half-time challenges were held, one at each school during a high school boys and girls basketball game.  All attendees at each basketball game had the opportunity to put their name in the bucket to be drawn for a chance to take on the challenge. With each contest, one minute was set to the clock and the participant was challenged to a lay-up, free-throw, three-pointer and half-court shot. With each made basket a donation was made to the school’s program of choice.

Each contestant, at all four games, made it through the three pointer, winning $100 for themselves and  $800 for the school. The non-athletic points of donation were DLB’s high school band and South Prairie’s fine arts department.  The participants included: Izaiah Bjerklie, DLB fourth grader; Kelly Schaefer, DLB fan; Brooklynn Mosser, South Prairie freshman; and Hayden Bohl, South Prairie freshman.

“We greatly appreciate the generous funds we received from United Community Bank for our developing drama program,” says Paula Rauschenberger, South Prairie High School Drama Director. “The number of young actors and stage crew members that we have involved grows with every production and, the money we obtained from the halftime challenges at our sporting 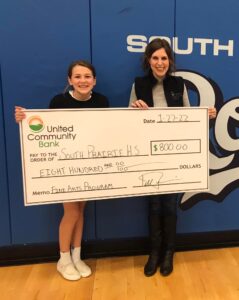 events makes it possible for us to purchase scripts, royalties, costumes, and tech equipment that we normally would have to borrow from other schools.”